Start topics here about Dune that are not bloody likely to be screwed with by me.
Post Reply
20 posts • Page 1 of 1

A while ago a scholar named Kristin Brennan put together a dynamite page detailing the cultural artifacts that George Lucas used in putting together Star Wars. Dune, according to Brennan, play a large role in that. She planned on writing a book about the topic, but never got it published, so she threw her ideas up on the web. I'm not sure why, but recently the page was yanked. I hope its because she got a book deal, but I just dont know.

I have a link to the cached version of this on the Dune Secondary Sources page, but I just found a copy that someone saved and have put up independently. Here is the link:

EDIT: Looks like the apostrophe kills the hyperlink, and I cant embed it either, so please just cut and paste.
Something is about to happen, Hal. Something wonderful!

URL Wizard to the rescue!!!

You just have to replace the apostrophe with its URL code equivalent, which is %27:

(It's really kinda dumb of their webmaster to use spaces and all in a webpage filename. Oh well.)

I remember seeing this one before. Pretty inneresting. 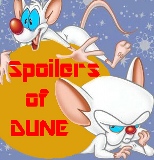 Hey, you're no slacker yourself.

I hate to sabotage Nymphitz's thread over on 'Keen, but since Byron was the second poster, it's kinda irresistable.

(Cold down there tonight?

I read this several years back. Some of it is on the level, other parts are a real stretch. I've no doubt Lucas was inspired by Dune (particularly since he's stated as much) and no doubt various aspects of the Star Wars stories represent the science fiction landscape of the times. Particularly seminal works like Dune will always tend to lead the pack and influences can be found in everything from the successful to the mundane. Take examples in music or film, such as everything in post 70's hard rock/metal influenced by Led Zeppelin or how everything in post 80's cyberpunk film/anime owed something to Blade Runner.

The big problem I have with all these source comparisons (and I'm not just singling out Brennan's work here) is the amount of time and the level of involvement all these myriad suppositions would require. Particularly the character/place/event comparisons come across as so vague that correlations could be found in any story, science fiction or not. Such comparison credit also has a tendency to ascribe far more credit to Dune for these archetypes and story structures than it deserves. Many of these "similarities" only come to mind via prompting and observer-expectancy. Tatooine is a desert planet just like Arrakis, but Tatooine is also just like thousands of other one-climate themed planets littered throughout science fiction both before and after Dune came about. In some of these cases pattern recognition counts for much of these "similarities" and that doesn't count for much.
"What are we to call him, this Player of Games?"

That is a good point, GamePlayer. Especially the way Brennan writes that site, it sounds like she has Lucas sitting down and thinking "how can I use this other piece of literature, and how shall I relate it to my masterwork?" I think its more likely that those things just kind of flowed in there by osmosis, and I wish someone would put some more thought and research into describing the process. I have no doubt that Lucas thought about some of these things, and in other cases just went with what felt right, and may have an opinion about whether the source was important to him in hindsight.
Something is about to happen, Hal. Something wonderful!

Han Solo, C-3PO, R2-D2, and Princess Leis and the trip to take her to safety comes from THE HIDDEN FORTRESS, and watch the first Flash Gordon serial lots of influence there as well.

Robspierre wrote:Han Solo, C-3PO, R2-D2, and Princess Leis and the trip to take her to safety comes from THE HIDDEN FORTRESS, and watch the first Flash Gordon serial lots of influence there as well.

He also had an influence from classic fairytale archetypes, because he was basically looking for a fairytale in space to appeal to the kiddies.

If I hear another moron saying SW is a DIRECT ripoff of Dune just because of one damn desert planet and because they don't know how to actually pronunce Alia or Leia, I will scream my fucking head off.
"Moderation in temper is always a virtue; but moderation in principle is always a vice. ---Thomas Paine"
Top

Perhaps most damning of all though, is not the simularities in plot. Nor the simularities in the characters, the powers, or the techs. The most damning peice of evidence that Star Wars is derived from Dune is that the original script was rejected by the studio because it was almost exactly the same as Dune. Gary Kurtz was hired to help re-write the script, and many drafts later they finally had a version which the studio beleived wouldn't result in there being sued for plagiarism by the Herbert Partnership.

She is being guarded by one of her generals, (Luke Skywalker) and it is he who leads her on the long and dangerous journey that follows. They take along with them two hundred pounds of the greatly treasured "aura spice", and also two Imperial bureaucrats, whom the general has captured.

The two terrified, bickering bureaucrats crash land on Aquilae while trying to flee the battle of the space fortress. They accidently discover a small container of the priceless "aura spice" and are rummaging around the rocks pushing and pulling each other trying to find more when they are discovered by Luke Skywalker and taken to his camp.

The princess and the general are disguised as farmers, and the bureaucrats join their party with the intention of stealing their "land speeder" and "aura spice". It doesn't take them too long to realize the general isn't a farmer and that they are captives about to embark on a dangerous mission. The two bureaucrats are essentially comic relief inserted among the general seriousness of the adventure.

While interesting, those do not show that Dune was a MAJOR influence on Star Wars, Game Player said it best in his post and I am not saying Dune had zero influence, just that Hidden Fortress and the Flash Gordon serials along with Campbell's ""Hero of a Thousand Faces" mythology work were by far the most influential works on the Star Wars mythos. Flash Gordon in particular, the Sand People were lifted from the serials as well as sequences that were almost shot for shot the same in Star Wars the same goes for the Hidden Fortress. I do think the Spice Mines of Kessel are a hold over from the earlier Dune influences in the earlier drafts but based on what I have seen so far, Dune was never a major influence.

I consider early drafts no different than brainstorming. Almost every creative process, from literature to music, to film, goes through creative dissonance during which the form of the work is taking shape. Influences, homages, and all kinds of "damning evidence" can be injected or ejected at will. The only thing that matters is the final form and whether that final form can be judged as distinct enough to stand on it's own. In the case of Star Wars and Dune, there's never been any doubt in my mind that the two works are their own. It's no different that claiming The Matrix is an Alien ripoff, desperately attempting to build the similarities of the two works into more than what they are. In the end, the final products are miles away from each other, despite the obvious and undeniable lineages and influences.

Moral of the story: don't succumb to the modern media's infectious need to build a mountain from an ant hill

"What are we to call him, this Player of Games?"

George Lucas' hit movie Star Wars came out that year (1977). The film was shocking to me, for all the similarities between it and my father's book, Dune. Both featured an evil galactic empire, a desolate desert planet, hooded natives, strong religious elements, and a messianic hero with an aged mentor. Star Wars' Princess Leah had a name with a haunting similarity to Dune's Lady Alia of the noble house Atreides. The movie also had spice mines and a Dune Sea.

I phoned my father and said, "You better see it. The similarities are unbelievable."

When Dad saw the movie, he picked out sixteen points of what he called "absolute identity" between his book and the movie, enough to make him livid. He thought he saw the ideas of other science ficiton writers on the screen as well, including those of Isaac Asimov, Larry Niven, Ted Sturgeon, Barry Malzberg, and Jerry Pournelle.

Still, Frank Herbert tried to be upbeat. He and the other science fiction writers who thought they saw their work in Lucas' movie formed a loose organization that my father called, with his tongue firmly placed in his cheek, the We're Too Big To Sue George Lucas Society. Through humor, dad tried to mask the pain.

--Brian Herbert, from his biography of Frank Herbert, "Dreamer Of Dune".

http://pulphope.blogspot.com/2007/08/dunestar-wars.html
They were destroyed because they lied pretentiously. Have no fear that my wrath
will fall upon you because of your innocent mistakes.
~Leto II, God Emperor
Top

IMHO anyone who does not see the striking similarities either is not looking, or has a personality that requires absolute reckoning before acknowledgment is given.
Something is about to happen, Hal. Something wonderful!

I think it is rediculous think that any work in the genre hasn't been influenced by Dune. For me the similarities are plain to see but I'm on the fence as to whether SW is a rip-off or an homage.

Anyone got any quotes from Lucas regarding this?
They were destroyed because they lied pretentiously. Have no fear that my wrath
will fall upon you because of your innocent mistakes.
~Leto II, God Emperor
Top

Well, I haven't found an actual Lucas quote but I found this article that says: "George Lucas acknowledged Dune as being an inspiration for Star Wars."

Omphalos wrote:IMHO anyone who does not see the striking similarities either is not looking, or has a personality that requires absolute reckoning before acknowledgment is given.


I see a lot more similarities in The Hidden Fortress and Flash Gordon than I do Dune, in particular check out the first Flash Gordon serial. A lot of Tatooine came from that serial.

Star Wars has a lot of creepy similarities to Dune, but I don't think it's that relevant.

People always take from previous works when writing new stories. Dune borrows heavily from Greek mythology and plays, doesn't it? Isn't Paul a lot like Oedipus, in a lot of ways? (So, he doesn't kill his father or marry his mother, but he does fight his destiny- that he knows about beforehand, and he does end up blinding himself and leaving his kingdom to his children, but in the hands of a regent.)

Eh. I'm not sure where I'm going with this, but yeah, this kind of thing happens, but really, does anyone care?
"It means ruin to choose to think for oneself if one can't think." -Jens Bjorneboe
Top

Sphinx, Spice? Could there be a lit class term paper in there?